There are two kinds of movies about Child Custody: fun ones and sad ones. Yes, there is Venn Diagram overlap, but Meryl Streep wins Oscars for one kind and the others play on repeat on TBS on holidays. It’s a #FoxtrotFriday, so we’re leaving Kramer vs. Kramer, in all its excellence, off this list and focusing on the fun ones.

We’re experts at Child Custody, not at film, so if you disagree with our review of a movie on this list or if we left your favorite off the list entirely, leave a comment and let us have it!!!

~ click here to book your Child Custody consultation at www.ThinkFoxtrot.com/public_calendars/~ 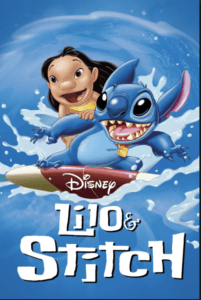 So Disney made a movie where DHR is the bad guy. What else can we say?

Your younger children won’t really get what’s going on but, with older kids, especially those with DHR experience, it’s a good opportunity for a meaningful discussion and to see the way Disney respects and portrays the struggles of children in the system.

I had to dock a point for space aliens. I guess I could also dock a point for DHR giving Nani chance after chance rather than taking her sister and asking questions later. But, we go 4 out of 5 because the extra realism point for Nani going through this ordeal without the advice and advocacy of Child Custody counsel, which all too many parents dealing with DHR do.

If we didn’t do what we do for a living, the DHR element might ruin it for us. This isn’t why we go to Disney, but I’m glad they took their shot to show us that you might be dealing with DHR but you can still be a Disney Princess.

~ click here to book your Child Custody consultation at www.ThinkFoxtrot.com/public_calendars/~ 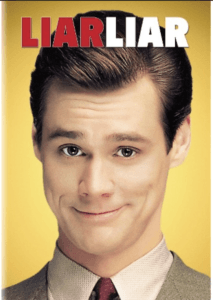 No, you cannot just move your child across the entire country. I don’t care if he was the guy from The Princess Bride. You would think Jim Carrey’s character, a freaking lawyer, would have filed a Petition under whatever California’s Version of the Alabama Parent-Child Relationship Protection Act is.

Jim Carrey is hilarious and sure to please, but there are some adult situations and certainly some adult themes here.

See my initial reaction above. Jim Carrey could be a heck of a lot worse than overworked and emotionally distant and no judge in her right mind would allow the Other Side to take a child that far away from the non-custodial parent. 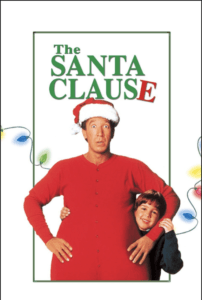 One of my favorite things about this movie is the way Tim Allen says the name “Neil” when talking about or to his ex-wife’s new husband. If you say you’ve never felt like that towards the guy or gal that gets to live with your children instead of you, then good on you I guess, but I’m not sure I believe you.

Same issues as Lilo, above.

One point deduction for Dad actually being Santa Clause. If I were representing Mom here I would have the same concerns the character did. The line from the Judge, (robe not Rheinhold), about the length Scott Calvin has gone to manipulate his child is pretty on point.

and last, but certainly not least…

~ click here to book your Child Custody consultation at www.ThinkFoxtrot.com/public_calendars/ ~ 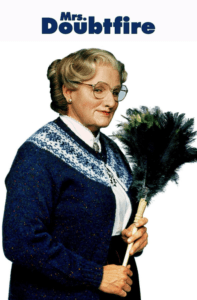 This movie is a miracle. The planets aligned or did whatever they had to do because this movie is perfect and Robin Williams is so damn good at his job it gives me goosebumps.

I think I remember some language issues. The humor is a little more “adult” than some of the other films on this list.

The issues here are a lot like those in The Santa Clause except that Tim Allen had the excuse of actually being Santa Clause. From a legal and purely logical perspective, what Robin Williams’ character is doing here is NOT OKAY. He is a home intruder trying to get close to children he’s court ordered to stay away from. The one-point realism deduction here is because this is not happy ending stuff; this is under the jail, supervised visitation at Family Services level stuff, and Sally Field is more than justified in her concern. That said…

If you haven’t seen these movies they’re worth a rent even if they’re not on your streaming service of choice. Child Custody is always a bit of a tough bite to swallow, but having a sense of humor about it can’t hurt and it sets a good example for the kids.

Did we leave your favorite off our list? We’d love to hear some suggestions we haven’t thought of.

This article contains general information and should not be construed as legal advice for you and or your unique situation. If you would like to speak more about how you, as a Committed Parent or Caring Relative, can be more effective in your Child Custody case, please visit www.ThinkFoxtrot.com/public_calendars/ to schedule your initial consultation at one of our offices. ~SW, Foxtrot